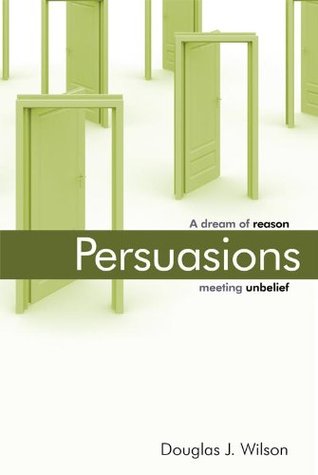 Douglas Wilson’s book, Persuasions is a collection of short parables involving the character Evangelist, who meets various people in a variety of situations all having one thing in common. They are all walking the one Road toward the Abyss. The Master of the City tried to give warning to the travelers, but many ignored them. One man known only as the Evangelist meets these travelers. With what seems to them as almost otherworldly ability he sees right to the heart of the individuals and can share with them the truth about their journey.  Some of the people whom Evangelist encounters seem significantly impacted by his insight and profound revelatory words, others offended, while yet others just ignore and keep walking on.

Persuasions deal with some very pertinent issues facing humanity today, Immorality, Feminism, Atheism, Marriage, Hypocrisy, Evolution, and other topics. Each issue discussed is done with articulation and a firm understanding in a manner that engages the reader to think as well as respond all in the same paragraph.

Mark, a seemingly intelligent atheist is walking on the road when he encounters Evangelist. What follows is their discussion as to the validity of reason and the cogency of the argument Mark posed, to prove his perspective. Mark believes that by definition, Creation is a fairy tale. However, he is quickly given a question that sends his prior conception of reality into question. “How can time, and chance, acting on matter, produce reason?” What follows in the chapter clearly shows Mark the fallacy of his thought process and his notion of the believability of the existence of God.

“I don’t have time for fairy tales” Evangelist smiled.  “Neither do I.” The idea that belief in God equates to fairy tales is a common objection given by atheists. Persuasions doesn’t let the reader get bogged down in bad argumentation nor does it evade the questions posed by Mark, the Atheist. According to him, reason has always been thought to be the sole bastion of reality, as well as the proprietary realm of the atheist and not visited by the Christian. However, Evangelist shows Mark how his reasoning fails on his grounds and under its own merits; simply put, his reasoning for reason is unreasonable.

Evangelist gets to the truth of the matter concerning the atheist plane of thought by uncovering its core of nihilism. Once he exposes the fallacy of Mark’s reliance on the very subject with which he dismisses God, Mark has only the truth that his denial of God is unreasonable.

He is left with one more thought by Evangelist as he continues walking on the road, which is if there is no reasoning left to rebel against God, he must then be faced with the fact of his sinful nature. And that his only real reason for continuing to deny God is that he wishes rather not to live according to the way God insists that we live. Mark’s final comment is that Evangelist is presupposing the existence of God, to which Evangelist simply replies almost knowingly, “certainly.”

God's Just Destruction of the Canaanites

November 19, 2015
by  Eric Lyons, M.Min. Originally Published on Apologetics Press  Link to original Article here In the 1930s and 40s, the Nazi regime committed state-sponsored genocide of so-called “inferior races.” Of the approximately nine million Jews who lived in Europe at the beginning of the 1930s, some six million of them were exterminated. The Nazis murdered approximately one million Jewish children, two million Jewish women, and three million Jewish men. The Jews were starved, gassed, and experimented on like animals. In addition, Adolf Hitler’s Nazi regime slaughtered another three million Poles, Soviets, gypsies, and people with disabilities (see “Holocaust,” 2011 for more information). Most sane people, including Christians and many atheists (e.g., Antony Flew, Wallace Matson), have interpreted the Nazis’ actions for what they were—cruel, callous, and nefarious.  Some 3,400 years before the Holocaust, the God of the Bible commanded the Israelites to “destroy all the inhabit
Post a Comment
Read more

Is the Book of Mormon from God?

December 22, 2015
by  Dave Miller, Ph.D. How may a person distinguish between truth and error? Can a person  know  which religion is right? Must a person rely on  subjective  inner inclinations and feelings? Or is religious truth ascertainable and knowable based on  objective  assessment? Most religions (e.g., Buddhism and Hinduism) base their credibility on some mystical or transcendental experience. Even some “Christian” groups (e.g., Pentecostals, Presbyterians, Methodists, Baptists, et al.) claim that their credibility and authenticity may be established on the basis of the Holy Spirit Whom, they say, gives them their assurance. But when the Bible is examined, no such role is assigned to the Holy Spirit. Mystical religions have always existed, and have insisted that they were the recipients of leading and guidance from superior forces that are “better felt than told.” The God of the Bible, on the other hand, always offered evidence— proof —of the divine origin of the message before He expect
Post a Comment
Read more