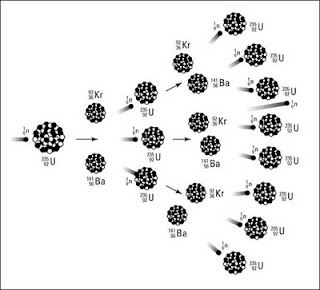 The image to the right is a picture is of a chain reaction, in nuclear chemistry, it's a continuing cascade of nuclear fissions. Reactions of this type also release a lot of energy. Where does the energy come from? Well, if you make very accurate measurement of the masses of all the atoms and subatomic particles you start with and all the atoms and subatomic particles you end up with, and then compare the two, you find that there's some "missing" mass. Matter disappears during the nuclear reaction. This loss of matter is called the mass defect. The missing matter is converted into energy. Einstein developed this into his well known equation E = mc2. In this equation, E is the amount of energy produced, m is the "missing" mass, or the mass defect, and c is the speed of light, I asked myself, what kind of "mass defect" do I have, when I start out what type of energy am I converting, am I creating positive or negative energy.

We Live in a fallen world, it’s a true fact regardless of your personal beliefs if you are a believer in God or not. This world is not getting much better. Things are bad, our economy is in the toilet, our government can’t seem to lead itself out of a wet paper bag, and our environment is quickly deteriorating. Most of the new popular books are about self help books that are guiding people to be the best you that you can be, but what is the fulcrum to which we can leverage our situations to truly become a better us? It’s not through the help of our government or our economy it’s not even through the help of our environment; those areas are already in the dumps and are not in the position to help. Where then can we turn? The best place we can start is by looking at ourselves, not in a mirror (while some may want to do that more often) but rather look at the condition of our hearts. This time of year brings out the true character of us, that attitude you have with the old lady in line in front of you at the store, or the guy who just grabbed the last toy hamster off the shelf just before you could. How do you respond to that situation?


"In my experience, it is much easier to ACT like a Christian than it is to REACT like one. Most of us are good actors--we can play the part. But our reactions reveal who we really are." ~Mark Batterson~

The simple fact is that how we act in this fallen world shows whether or not we are a part of it or separated from it. When you are driving on the highway and you get cut off, what thoughts go through your head, and what words come out of your mouth. I had this situation happen to me just yesterday, I was about to pull out when a guy who happened to be driving on the shoulder nearly hit me. My first response was, to slam on my breaks hit my horn and call him an idiot. But then as I pulled out, I cut off two other people, (my mass defect) now in this situation I could say hey they needed to watch where they were going and I was in the right. But I just did the same thing that I was so upset at the other guy about. Of course I know that I’m not an idiot, and I am a good driver (no comments from anyone who has ever ridden with me), so I didn’t get mad at myself, and who knows I am sure that colorful words and thoughts that I thought about the other driver were now being directed at me by not one but two cars. So the fact is sometimes we are the idiots and sometimes the idiots are around us. The key is however how we react. I had another situation just a week prior when a kid who wasn’t watching rear ended me. He left two screw shaped dents in my rear bumper, and this kid didn’t even have insurance, a point that could have made me even madder. But I wanted to put into practice the Christian reaction, I could have hollered and screamed, I could have called him names and insulted his driving, I could have even thought, well he is just another irresponsible teen driver. None of which would have fixed my bumper, and knowing that the damage was so small that my deductible wouldn’t even have covered it. But I chose not to react the way I could have. In the end I felt much better about myself and the kid felt horrible enough, plus the spots on the bumper are not even that noticeable.
But just like in nuclear chemistry, there is a chain reaction. and if we are not careful our reaction will fizzle out just like a bad nuclear equation. Or our reaction can have deadly results. So remember in this fallen world, in this time of high stress, which by the way should be a time of joy and sharing, really ends up being the time with the highest stress and highest depression and suicide rates. Let’s stop and think about how we REACT since to be able to react there has to be an act done to us first, it is our choice to act like the fallen world or act like the Jesus that lives in us.