Not another "War on Christmas"

December 14, 2016
Before I hear about the "War on Christmas" from anyone else this year I want to share something... If the worst thing you have to deal with is a nativity being removed from a city hall, a cross taken down from a tree on the city square, or any other number of stories about the ACLU "ruining Christmas" remember the Bible says, Matt. 10:22 "You will be hated by everyone because of me, but the one who stands firm to the end will be saved."


Remember (those of us who are Christians), being offended that the world does what the world is going to do doesn't steal from us as believers. If you let this stuff steal your joy then that's on you... NOT THEM.

It just shows what was mentioned about 2,000 years ago that we shouldn't expect any less. This concept of government not accepting or promoting the Christian faith is not a new one... it's not Obama, it's not the Democrats, it's not the Supreme Court it's just the world being the world. I mean look at history for a bit, read Nero's persecution of Christians in AD 64, he hung Christians on burning crosses for fun, while dressed up like a circus act... seriously. 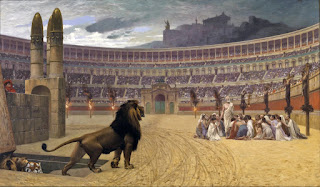 “Therefore to eliminate this rumor he falsely produced defendants and inflicted the most extraordinary punishments upon those whom, hated for their crimes, the people called Christians. The origin of this name was Christ, whom the procurator Pontius Pilate put to death in the reign of Tiberius; crushed for a while, the deadly superstition burst forth again not only throughout Judea, the source of this evil, but even throughout Rome, to which all horrible and shameful things flow from everywhere and are celebrated. Therefore the first persons arrested were those who confessed; then on their information, a great multitude was convicted not so much on the charge of setting fire as on hatred of the human race. Mockeries were added to their deaths, so that wrapped in the skins of wild animals they might die torn to pieces by dogs, or nailed to crosses they were burned to death to furnish light at night when day had ended. Nero made his own gardens available for this spectacle and put on circus games, mingling with the people while dressed in a charioteer’s uniform or standing in his chariot. As a result there arose compassion toward those who were guilty and who deserved the most extraordinary punishments, on the grounds that they were being destroyed not for the public good but for the savagery of one man”
(Tacitus, The Annals 15.44.2-5)


Honestly it's time we stop getting offended and realize that we really have no "right" to be offended when the world acts like the world, we are called to so much more than this.

Jesus didn't die for you to have "rights" He died for you to be saved.


If you are staking your hope on your "rights" then you are missing what was prophesied to be your future by Jesus himself. And if this is all it takes for you to start complaining about the world... my friends your faith is shallow. Do you stand on the Word of God or are you going to be offended at the world being what it has always been.

I love you all and I am a firm Christian, but let's spend our time this season being Jesus, not being offended for Jesus. He doesn't need our offense, He already died and called us to do the same thing... and friends believe me when I say, he wasn't kidding when he called you to be willing to "take up your cross and follow Him." This is no cross... this is a stubbed toe at best.